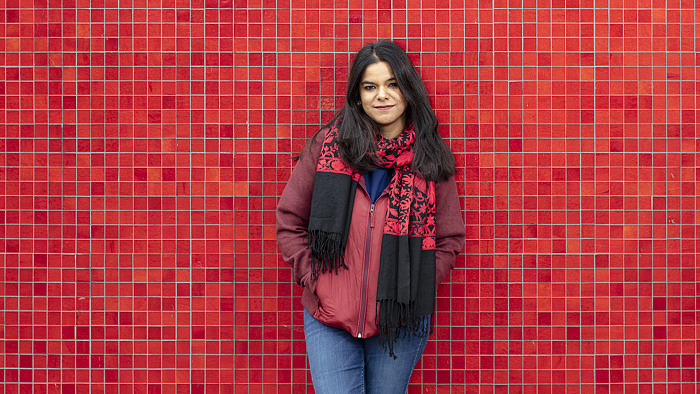 Parul Ghosh arrived in Helsingborg from India in 2017 and found herself lost in a new culture. She decided that daring to challenge herself was the only way to bridge the gap, and now she’s running several city-funded projects to help other residents. But how is it when cultures meet, and what are the differences we have in common?

Robert Reilly works as a copywriter for H22. We had an Irish immigrant interview one from India. What is it like to come to a city like Helsingborg, to new contexts and other ways of living?

As an Irish immigrant arriving in a new country, the first place I went to find information and start networking was the local Irish pub. Terrible Guinness but always a good place to start. How did you get out and meet people?

– I looked around for a network of internationals. I didn’t want to get lost in the Indian crowd, otherwise I could have just stayed in Delhi. My thinking was that if I want to make this move, I need to get out of my comfort zone, put myself in awkward situations. Otherwise you get lost in your own bubble and stay at home. You need to just sign up for loads of events and cast a wide net. The first year was rough but you need to take charge of your own situation.

You can survive living in Sweden without speaking the language if you have the right job, but you get a much greater insight into Swedish culture and humour the more you learn. How’s it going for you?

– The language course at SFI was a great way to meet people from all over the world. With a foreign language, it’s all about confidence and daring to make mistakes. And it’s pretty funny when Swedes can’t stop themselves from imitating your accent. For me, that means that a connection has been made and the relationship is going well.

Yeah, I’ve made my share of mistakes with the language. While bartending once, I mixed up the words “ful” and “full”, and I told a guy I couldn’t serve him because he was too ugly (instead of drunk). Bit awkward. So how do you find the Swedes?

– I was a little worried before coming here that it would be hard to form relationships, and it does take a bit of effort. But they’ve become the most loyal friends I’ve ever had. You see among Swedish people that most friendships go back many years and they really cherish each other. That’s pretty unusual today I think. I find they talk more openly about their feelings in a way that other nationalities don’t. And I love the fact that they’re so independent. In India, there’s so much help expected from family and elsewhere, you never have to toughen up. In Sweden, everyone is so used to taking care of themselves, especially the elderly people! So impressive.

True. I found early on that even opening the door for elderly people drew strange looks. It’s the small cultural differences that are most surprising. What are the differences you’ve found since living in Sweden?

– There’s the “fika” culture at work, of course. Taking coffee breaks together is an absolute must to be seen as part of the team. But generally there’s this culture of trust. My favourite example is one I’ve seen at my shared workplace and the university. A bowl of chocolates and a sign saying ‘take one and register’. That bowl would be empty in about ten seconds back home! And this trust is also between the government and the people. For example, the city has trusted me with their money to run my projects.

You’ve received money from the Vision Fund for a website in English to help people who are new to Helsingborg. And now you’re the first to receive funding from Näringslivsfonden Corona to build a digital platform for helping local businesses. You’ve really become engaged with the city and its people!

– I think things are changing, there are more opportunities and I see more immigrants getting projects. The idea with this fund was to build a kind of resource hub, but I think now it’s also to push people. If you have an idea, try it. I’m not a technical person but this has pushed me, and I’ve enjoyed every step. This is what strikes me as so Swedish, this trust in the people. Someone in the city wanting to do something for the city. If it fails it doesn’t matter, it’s the initiative that matters.

Helsingborg will be hosting a massive city expo in 2022 and people will come from all over the world. What can they look forward to with the city?

– It’s got this old city charm to it, old architecture and cobblestones. But it’s also embracing technology, AI, and the whole smart city concept. They go hand in hand, there’s a contrast but they co-exist. I’m really excited to see how the city develops in the coming years. And of course the people are super friendly and welcoming!

Agreed. For me, it’s a big city with a small town feel. What’s your favourite thing about living here?

– The silence. I come from a city of 19 million. Here, there’s a perfect balance of city and nature. It’s connected to the rest of the world and Sweden, with the ferry and the Öresund region, but you can disconnect yourself when you want to. Normally you have to leave a big city for that. When I go home to India, it takes a while to get used to the noise.

It’s the same in Ireland, constant chatter and little space to think. In the beginning I found Sweden very reserved and low key, but once you get into it, it’s just a different way of living and interacting. There’s more time and head space for reflection.

– It’s made me really calm, and I’ve learned to spend time with myself and slow down. And it’s given me space to think about new things I want to try. For people visiting or coming to stay, I’d give them the following advice: come with an open mind and experience it on your own terms. Be brave, embrace the differences, and take it one day at a time.

Parul’s website This is HBG is full of stories and tips for those new to the city. www.thisishbg.se